What’s Your Definition of a “Great” Tequila Bar? 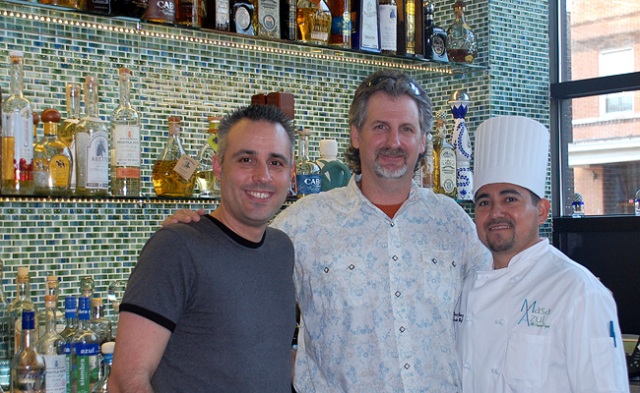 While thinking about how I wanted to write-up my recent trip to Chicago and close out my series of pieces detailing my tequila-filled September, I realized that there really wasn’t much I could pass along about that trip. In reality, I had very little free time and I used it to visit Jason Lerner at his new restaurant, Masa Azul. I met Jason in Albuquerque back in July at the NMIITT event where we were both invited judges. I’ve followed his progress as he and his business partner, Alvaro Chavez, worked to open their restaurant and tequila bar, finally doing so in late August. 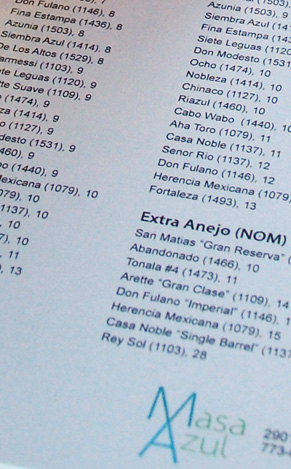 At that time, a publication had just named Masa Azul one of the top 25 tequila bars in the country. Lofty praise considering the business had yet to open its doors or serve a single drink. I attributed the recognition to what I assumed to be Jason’s industry reputation garnered during his time as General Manager at Chicago’s Depot Nuevo, also a Top 25 entry. After meeting him, I found his passion, knowledge and pending plans for Masa Azul to be exciting and refreshing. He was happy to share his knowledge and still eager and open to learn more, something I might describe as a humble confidence. He and Alvaro were working to open a place where tequila was the focal point both in the unique cocktails and the not-so-mainstream tequila list (which would also include mezcals and sotols). While certainly not a new concept, these are things that often get looked over in favor of simply trying to open a trendy hot-spot. I was looking forward to getting to see the fruits of his labor and had originally planned to spend my only free evening there so that I could then put together a write-up about Masa Azul and, specifically, about the tequila selection and cocktail menu. Unfortunately, I was only able to spend an all-to-quick hour at the restaurant due to a last minute change to my work obligations, and with that change, so also went my story. Or so I thought.

The idea of the “Top 25” list intrigued me and got me thinking about what qualities I look for in a tequila bar. So now, instead of giving what probably would have ended up as a simple review of Masa Azul, I am taking this opportunity to examine the “tequila bar” a bit more in-depth and ask you this simple question: What is your definition of a great tequila bar?

Of course, it would be wrong of me to ask such a question on my own site without also giving my own opinions. With that in mind, the specific attributes that I look for are:

A great tequila selection – One might think this is an obvious requirement and that an establishment should stock 150+ different tequilas. I think a better way to look at it is that a bar should have a diverse selection that incorporates the gamut of flavor profiles. To qualify as having a great selection, a bar can certainly have oodles of bottles but it can also carry only 35-40 if those bottles are well thought out, provide a variety of styles and flavors (including mezcals and sotols), and includes some brands that might be hard to find.

Knowledgeable and friendly staff – This should be an obvious and easy one! The staff – or at least the bartenders – should know the basics of most every bottle on their shelf so that they can answer questions and make recommendations as to what you as a consumer might enjoy. In addition, they should be able to suggest the best glassware to drink it in. I don’t want my order of Partida Elegante served to me in a shot glass with a lime wedge and salt on the rim without me specifically requesting it. Bonus points for suggesting a sangrita or including one by default.

Drink/Food program – A tequila menu, and one that can be easily updated, makes life easy for everyone – especially the person taking your order that has to make trips to-and-from the bar to see if they have what you want. Included with that should be a well thought out and original cocktail menu. Having one shows that the business has taken the time to put together drinks that are original and that ideally highlight the key flavors of a specific tequila, mezcal, sotol or other agave spirit. For restaurants, that includes suggested drinks that pair seamlessly with and compliment various plates on the menu. Additionally, having several preset tequila flights can be a great way to introduce someone to the differences that tequilas can have. Hosting tequila dinners and other events that promote tequila appreciation and education is also a plus. Finally, it speaks volumes as to what the bar uses in the “basics” – not only the fresh juices, syrups and sodas but also the tequila. For example, Masa Azul’s “well” tequila is the well respected Siete Leguas blanco.

Cost – Another easy one, fair pricing. I never want to walk out of a bar thinking that I could have just bought the entire bottle for the same price that my two snifters just cost me. I understand that a business has to make money and that the bar usually generates the best margins, but that doesn’t provide a license to gouge the customer. That said, there are many aspects that need to be accounted for in the cost of a drink, from the rent to the state tax rate on the spirits themselves. With this in mind, “fair pricing” should be relative to the location.

Finally, the most important attribute of all. It has to be a place that you want to be. Call it ambience. Call it friendly. Call it home. It really doesn’t matter what you call it because the bottom line is this – if you don’t enjoy being there, it’s not a great bar for you.

Even though my time at Masa Azul was short, there was a very welcoming feeling about the place and I regret not being able to spend more time there. Whether it is worthy of a spot on a national Top 25 list or not really makes no difference to me – those more expert than I, having trekked across the country to visit all of these bars, can make that determiniation. For me, all I can say is that Masa Azul is a place where I know I would enjoy spending time drinking and talking tequila.

So what do you look for in a tequila bar?

3 Responses to What’s Your Definition of a “Great” Tequila Bar?